Or, how a mysterious pair of 1950s shoes leads us to a larger story about race in America and vintage Las Vegas...

Very seldom do vintage clothing and accessories come to us with exact dates attached. Finding the occasional sales receipt included in a box, or an example of an extremely short-lived fashion fad, are some of the few times that we are able to pin an item down to an exact year with total accuracy—although we always do try our best!

However, occasionally one of our vintage pieces has such a unique history that, even as our initial research solves the mystery of exactly when and where it is from, it opens up a whole new range of inquiry for us to enjoy—and get lost in! 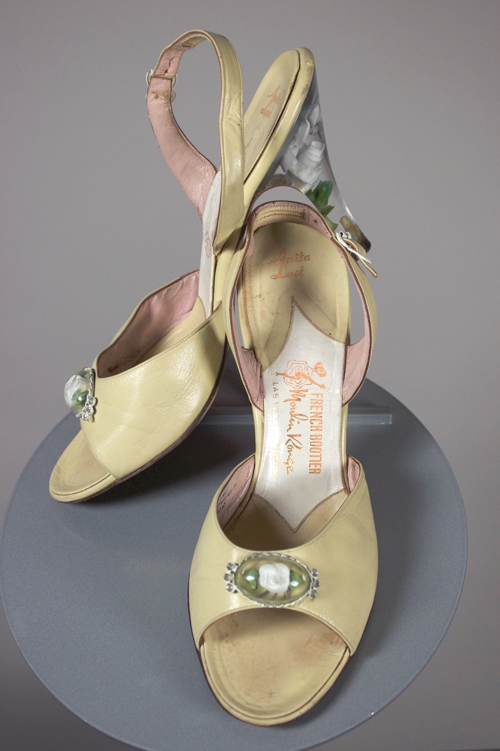 Such is the case with these lovely, but at first glance not incredibly unique, lucite-heeled ivory leather 1950s sandals. They are pretty enough, with back-carved, white roses in both their clear lucite heels and the lucite medallions adorning their uppers. A quick search for the manufacturer, John Marino, turns up various, nicely-made vintage shoes from the 1930s to the 1950s, all sold by various retailers. Nothing particularly distinctive. So, out of curiosity, I decided to do a search for the retailer: “French Bootier, Moulin Rouge, Las Vegas, Nevada”. 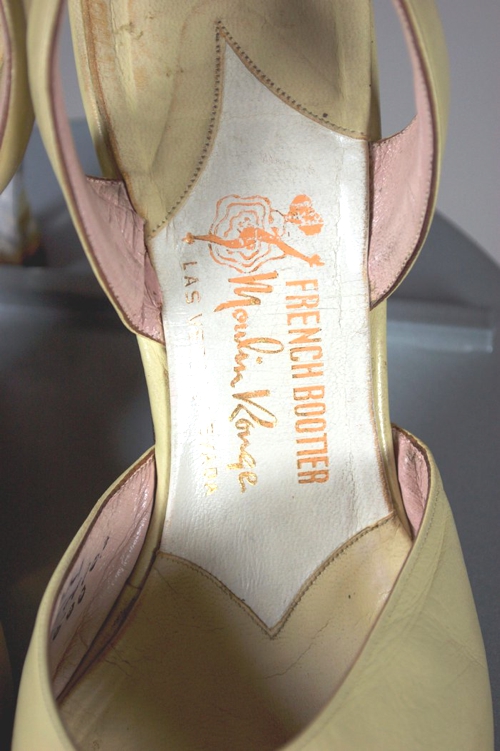 3 hours of images and info later, I came up for air…with a date for the shoes: 1955, plus a whole lot more! The shoes were originally purchased at the shop inside the (sadly short-lived, but fabulous and fascinating) Moulin Rogue Casino in Las Vegas. Touching on topics as diverse as the history of race relations and civil rights in Las Vegas, the history of that city’s casinos and their close relationship with the Mob, and the fabulous mid-century design of many of Vegas’s former gambling establishments—how could I not be hooked and want to know more? Down the rabbit hole of Vegas history we go….

In 1955, Las Vegas, like many US cities, was still very segregated. African-Americans were allowed to work as laborers or entertainers in the white-only casinos along the Vegas Strip, but not allowed to gamble there, or to stay in those casino hotels.

At that time, the black population of Vegas lived in an area called West Las Vegas. This neighborhood became the setting for the first fully integrated (from staff, to guests, to entertainers) Las Vegas hotel and casino, the Moulin Rouge, opened in 1955. 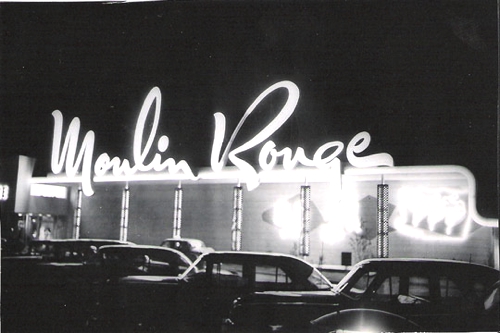 The Moulin Rouge Casino’s white investors, along with investor (and boxing champ) Joe Louis, saw the business opportunity in opening a place for the un-served black population of Vegas to enjoy dining, dancing, drinking and gambling in a glamorous casino setting. They also recognized the need to provide black entertainers (and hopefully, a new influx of black tourists) with a fabulous place to stay when visiting the city. Plus, by locating their new casino between the white-only Strip and the black residential neighborhood, they might be able to draw income and clientele from both. And, draw them they did!

Ad in Jet Magazine, 1955, for the opening of the Moulin Rouge in Las Vegas. 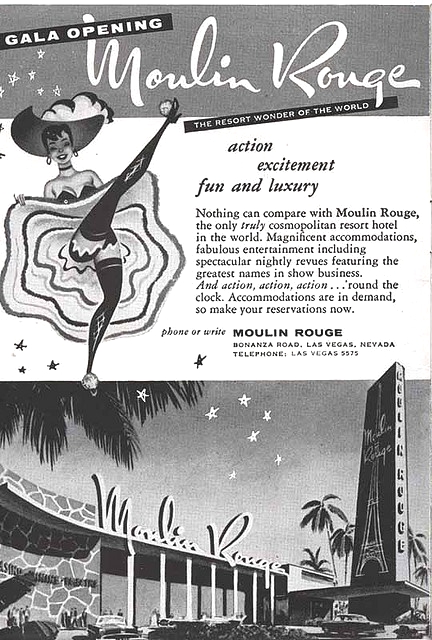 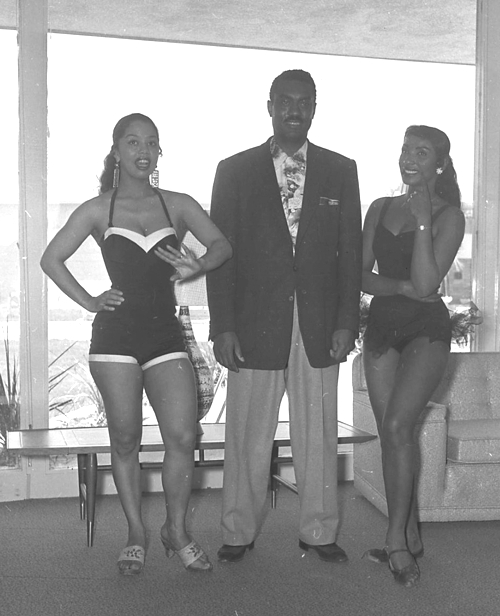 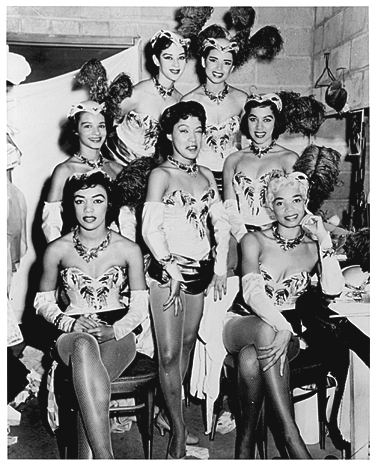 This drew the ire of the white casino owners (and, presumably, their Mob connections). They originally had seen the Moulin Rouge as no threat, but, when their white guests started showing up to the 3 shows a night at the upstart, integrated casino, instead of at the shows in their white-only establishments, they began to see things differently. 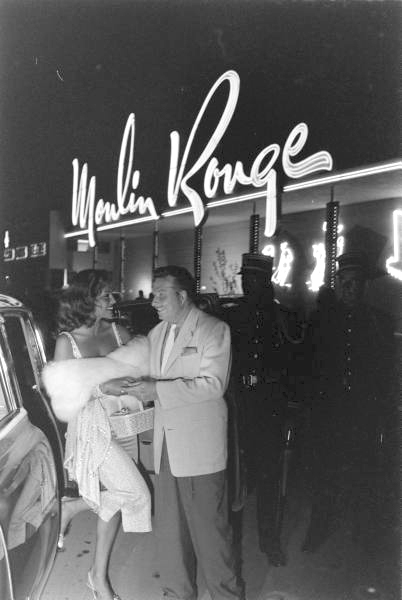 Opened in May of 1955, the Moulin Rouge Casino closed its doors after only 6 months, in November of 1955. The casino declared bankruptcy in December 1955—seems unlikely for a casino packed to bursting almost every night, but so the official story goes…

In the end, the short-lived Moulin Rouge contributed to ending segregation in Las Vegas. Many of its patrons and employees became supporters of the local civil rights movement. The (closed) casino was even the location of a meeting in 1960 between Las Vegas hotel owners, government officials, representatives of the local black community, and the NAACP president at the time. Under pressure of a protest march down the Strip, and as a result of this hastily arranged meeting, an agreement was reached to desegregate all of the Las Vegas casinos.

The facade of the closed casino, circa 1970s. 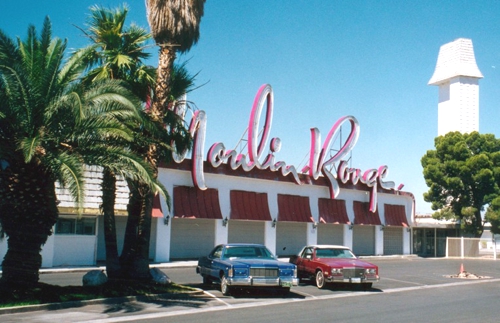 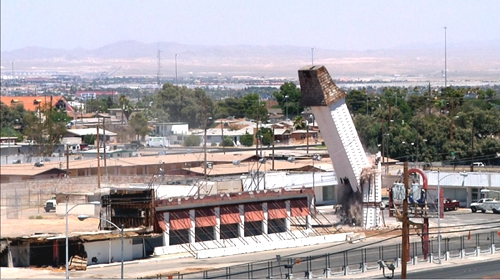 After standing empty for many years, the Moulin Rouge had changed hands multiple times, was in foreclosure, and had also been damaged by several fires. Finally, it had its fabulous neon sign removed to the Neon Museum “boneyard”, in 2009. More of the decrepit buildings were demolished in 2010. However, in 2016 there was some progress towards developing a new, Moulin Rouge-inspired property on the site. We shall see.

Meanwhile, I’ll leave you with a few more images of this historic place in its heyday, 1955. 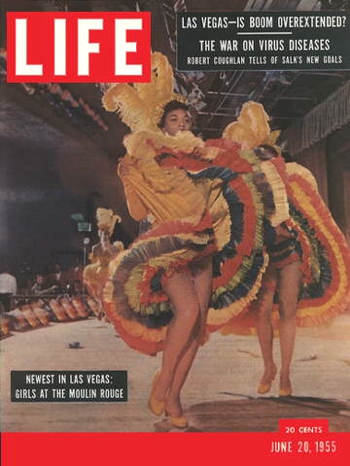 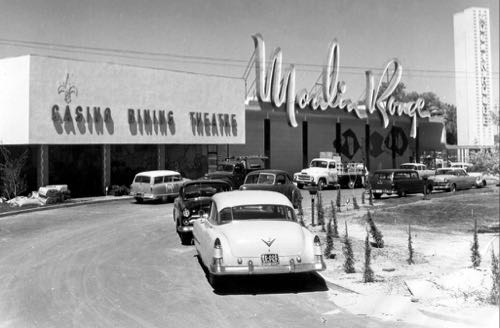 "The same Mob members owned the Liquor and the wholesale food Distribution in Vegas. After seeing how well the MR Casino was doing, decided to stop all distribution to it. Thus a successful business was "choked" into bankruptcy.

Frank Sinatra was one of the leading figures in the desegregation of Vegas. He Demanded that Sammy Davis, Jr. And many of his other black entertainment friends be given the exact cact same treatment as himself. And if they didn't. Then he, and the rest of the Brat Pack, plus other big names, would NOT work...Frank actually walked off a Job when the Casino would not let Sammy stay in the Suite next to Frank."